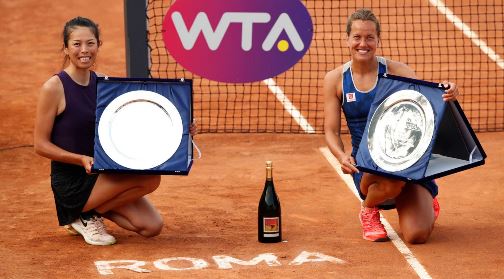 The duo, top-seeded at the women’s doubles event of the tournament, Hsieh and Strycova sealed their fourth title of the season with a 6-2, 6-2 victory over Anna-Lena Friedsam of Germany and Raluca Olaru of Romania. The victory extended their winning streak  to 12 matches and their 2020 win-loss record to rocking figure of  21-1.

Hsieh and Strycova, ranked No. 1 and No. 2 in the world in doubles, respectively, had only on blemish in pair’s record this season which was at the Australian Open in January, where they fell short in the final.

Hsieh said she was grateful to have the opportunity to play with Strycova once again. She added that they have played many tournaments together and that she feels safe and stable when her Czech partner is on the court.

Meanwhile during the post-match press conference, Strycova said the Rome tournament was the first event the duo had played together since the sport’s five-month hiatus due to the coronavirus pandemic. She said they did not know what to expect but that they soon found their rhythm and performed better and better.