World No.3 Naomi Osaka kept an unblemished run going by booking her spot in the Gippsland Trophy semifinals on Friday, after the three-time Grand Slam champion eased past Irina-Camelia Begu of Romania, 7-5, 6-1.

In a competitive opening frame, Osaka saved two break points to hold for 5-4 and prevent Begu from serving out the first set. The Japanese star eventually got ahead just in the nick of time, leaping to a 0-40 lead at 6-5 before Begu double faulted to hand over the opening set to her.

The second set was much more straightforward for the two-time US Open champion. Serving for the match at 5-1, Osaka slammed three straight unreturnable serves to reach triple match point. On her first opportunity, Begu sent a forehand long and Osaka skipped into the semifinals.

In the previous clash, Naomi Osaka had to dig deep against Katie Boulter in the third round. Boulter broke the Japanese’s thrice and raced to 6-3, 3-4 before Naomi shifted gears to rattle off eight of the last nine games to score a 3-6, 6-3, 6-1 triumph.

The three-time Grand Slam champion will now face either No.3 seed Elina Svitolina or No.7 seed Elise Mertens in the final four. 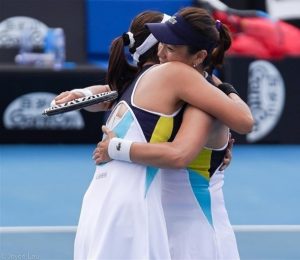 The Chan sister closed out the quarter final match against the Czech – Spaniard duo in 1 hour, 26 minutes.

They have set up a match against Russian duo Anna Blinkova and Veronika Kudermetova, who ousted  Romanian pair Monica Niculescu / Patricia Maria Tig 2-6, 6-2, [10-8].

THE ASIAN 14&U CIRCUIT IS BACK TO LIFE