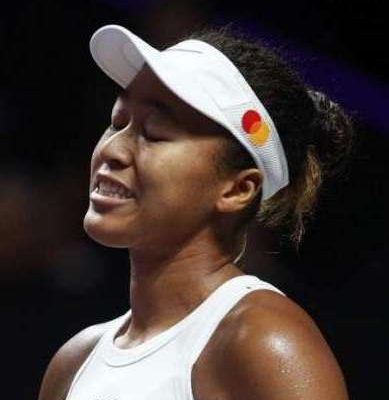 World number three Naomi Osaka has withdrawn from the WTA Finals in Shenzhen because of a shoulder injury.

Japan’s Osaka, 22, beat Petra Kvitova in three sets in her opening match on Sunday and was due to play world number one Ashleigh Barty on Tuesday.

The Australian Open champion will be replaced in the Red Group by alternate Kiki Bertens, the world number 10.

“I’m disappointed to have to withdraw. This is not how I wanted to end this tournament or my season,” said Osaka.

“I look forward to getting healthy and hope to be back here in Shenzhen next year.”

Osaka said she first felt the shoulder issue during her win in the China Open final against Barty on 6 October and only started serving again in the “last two days” before facing Kvitova in Sunday’s opening match that lasted two hours and 39 minutes.

“I felt it immediately,” Osaka said. “When I woke up the day after [facing Kvitova], it was throbbing.”

“It doesn’t feel like it’s anything more serious than muscular,” Osaka said. “It’s just a little bit painful. Definitely I don’t think it’s something that I would immediately need surgery for.”

Osaka had won 11 consecutive matches after winning back-to-back titles in Beijing and at the Pan Pacific Open.

The WTA Finals sees the world’s top eight players compete in two round-robin groups of four, with the winners and runners-up advancing to the semi-finals.

The tournament, which also includes a doubles event featuring the year’s top eight teams, has a record total prize fund of £10.8m.