The day four at the Wimbledon Championships saw a lot of action unfold and there were as many as 21 Asian players who took to the courts at the All England Lawn Tennis Club in London, United Kingdom.

Kazakhstan’s Alexander Bublik and Elena Rybakina are the two Asian players who have reached the third round in Gentlemen’s singles and Ladies’ singles, respectively.

Bublik knocked out 18th seeded Grigor Dimitrov of Bulgaria in a closely fought second round match. Bublik fired  34 aces to win the match 64 76 76.

Among the ladies, Rybakina had secured her third round appearance after triumphing over America’s Claire Liu 64 64 on day three of The Championships.

In doubles, Pakistan’s Aisam-Ul-Haq with his Austrian partner Oliver Marach knocked out 13th seeded Belgian pairing of Joran Vliegen and Sander Gille to advance to round two. 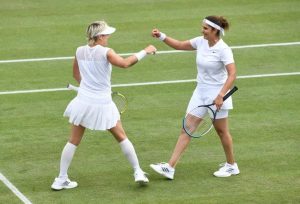 While among the ladies, Indian legend Sania Mirza made big noise upon her return to the Wimbledon after four years gap. She and her American partner Bethanie Mattek-sands ousted the sixth seeded duo of Desirae Krawczyk of USA and Alexa Guarachi of Chile.

Zarina Diyas of Kazakhstan and Arina Rodionova of Australia paired up to score a commanding upset against the second seeded team of Hungarian Timea Babos and French Kristina Mladenovic in straight sets 61 62.

On day five today at The Championships, Shelby Rogers of USA goes head on against 18th seed Kazakh, Elena Rybakina in the Ladies’ singles round three.

A unique all-Indian Mixed Doubles match, featuring Rohan Bopanna and Sania Mirza in one team and Wimbledon debutants Ramkumar Ramanathan and Ankita Raina forming the second team, will also be played among other Doubles and Mixed Doubles matches with Asian players today.

Results of Asian Players from Day four of Wimbledon Championships 2021:

Red hot Rybakina reaches fourth round on her Wimbledon debut