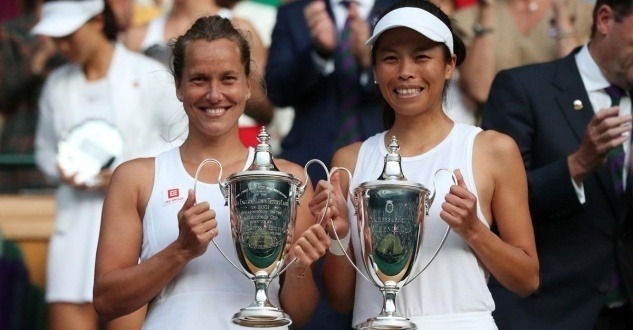 Chinese Taipei’s Hsieh Su-wei won the Ladies Doubles Title in Wimbledon along with her Czech partner Barbora Strycova who have defeated Canada’s Gabriela Dabrowski and China’s YifanXu in the straight sets 6-2, 6-4.

“I felt like this tournament, especially Wimbledon, from the first moment we stepped on the court together, we just laughed and we just enjoyed,” the Czech said.

Su-Wei herself had defeated 7 of the top 10 players and sure her streak will continue. The Taiwanese and the Czech have partnered for a very prosperous and fun time seeking havoc, confusion, silliness and winning solutions to all of their confused opponents.

She and Strycova is a spectacular pair and when the Asian was called a ‘Giant Killer’ by a media fellow, she corrects him saying “I don’t know how to be a Giant Killer. I just want to feel free and enjoy the match because anything can happen…” Most times she creates an aura on court that can’t be beaten with her unconventional strategies and demeanors. She praises her team for being her backbone of success.