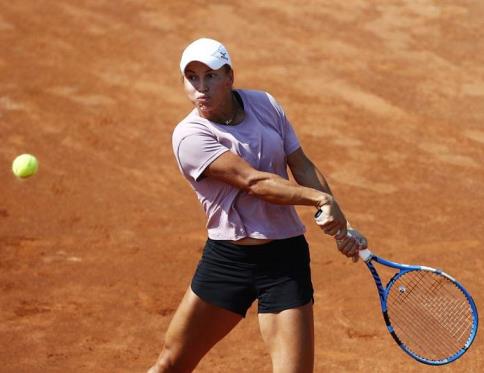 Elena Rybakina and Yulia Putintseva of Kazakhstan will go head to head in the third round of the Internazionali BNL d’Italia in Rome.

In the second-round match world number 30 Putintseva ousted Croatian Petra Martic 6-3, 6-7, 6-4. The three-set thriller lasted for 3 hours.  It was looking  all set for an easy win  for the 25-year-old as she led 6-3, 5-1 at one point. She however failed to serve out the match and  eventually went on to drop the set in a tiebreak.

Putintseva recovered quickly from this lapse and won the deciding set 6-4 to close out the match.

On the other hand, Elena Rybakina, world number 18 eliminated Czech Marie Bouzkova in straight sets 7-5, 7-6 (3) in her second-round match. Elena overturned an early deficit to win the first set 7-5, and had to dig deep once again in the second set before winning it in a tiebreak.

Elena seemed to be one of the most exciting young players to watch at the start of 2020. The 21-year-old was fifth on the Race to Shenzhen leaderboard before the tour was halted due to the COVID-19 pandemic.

The Round of 16 match in Rome will be the first ever career meeting between the two Russian-born Kazakh players, which should be a nail biting contest.