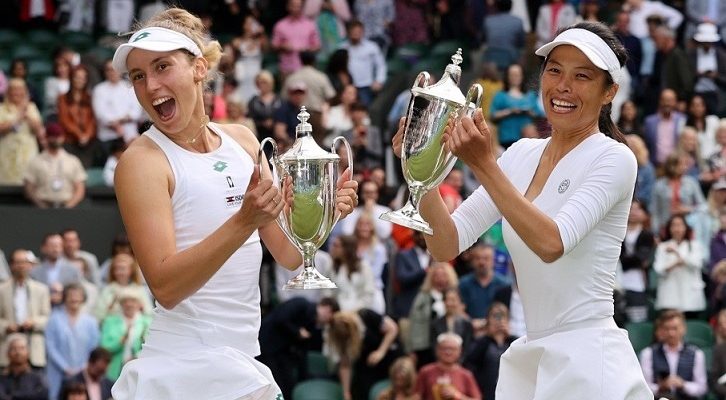 Asian Tennis’ member nation Chinese Taipei representative Hsieh Su-wei has scripted yet another glorious chapter in the history of Asian Tennis by defending her 2019 Wimbledon Ladies’ doubles title successfully en route to becoming a three-time Wimbledon champion at the All England Lawn Tennis Club in London, United Kingdom on Saturday.

Facing the unseeded Russian duo of Elena Vesnina and Veronika Kudermetova in the title match, 35-year-old Su-wei and her Belgian partner Elise Mertens had to dig deep and saved a couple of Championship points to lift their first coveted Wimbledon silverware as a team.

After a thrilling three setter finals, the score read 36 75 97 as both Su-wei and Mertens dropped to the ground at Centre Court after the Championship winning return by the Chinese Taipei star, Su-Wei.

Hsieh and Mertens edge a three-set thriller 3-6, 7-5, 9-7 against Kudermetova and Vesnina to win the Ladies’ Doubles title #Wimbledon pic.twitter.com/29Sqq9PuQJ

The win completes a successful title defense for Su-wei who won the doubles trophy with Czech Barbora Strycova in the last edition of The Championships held in 2019.

Before her two back-to-back titles, Su-wei had won her maiden Wimbledon doubles trophy back in 2013 with China’s Peng Shuai.

This title win is also set to lift Su-wei back to World no 1 ranking in doubles on the WTA rankings chart this Monday, displacing the current number one Barbora Krejcikova of Czech Republic.

Result of Asian Players on Day twelve of Wimbledon Championships 2021: