Putintseva into quarterfinals after beating Martic 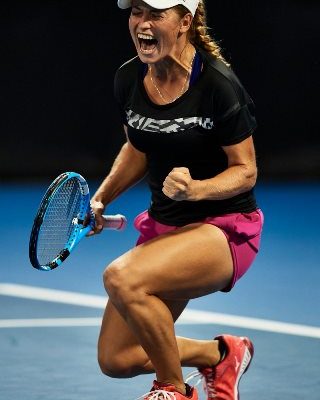 Putintseva, the first Kazakh to reach the fourth round in Flushing Meadows since Yaroslava Shvedova in 2016, becomes the first player from her country ever to make the last eight of the US Open, and adds a third major quarterfinal, and first off clay, to her two Roland Garros runs in 2016 and 2018.

In a first career meeting with Martic – who had also never progressed beyond the US Open fourth round – Putintseva varied her spins, used slice intelligently and wheeled out a series of perfectly executed dropshots to first dominate and ultimately emerge on top of a series of mini-marathons.

It was a match that had it all: riveting extended rallies, momentum shifts, attempted comebacks, shotmaking that ran the full gamut of spins and angles, and above all tremendous passion. Both players finished with positive ratios of winners to unforced errors, Martic tallying 40 of the former to 39 of the latter and Putintseva 26 to 25 respectively.

Next up for Putintseva will be a match with a maiden Grand Slam semifinal on the line for both players, as she takes on the in-form No.28 seed Jennifer Brady – against whom she is yet to lose a set in two past encounters

Naomi Osaka continued her quest for a second US Open title