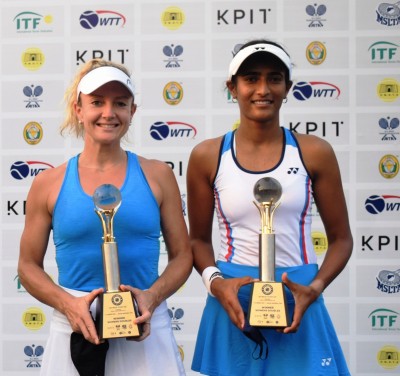 Top seeds Rutuja Bhosale from India and Britain’s Emily Webley Smith put on a solid demonstration of the i-formation as they clinched the doubles title with a 6-2, 7-5 win over Riya Bhatia of India and Romanian Miriam Bianca Bulgaru in the $25,000 KPIT MSLTA ITF W25 tournament held in Pune, India.

Riya and Miriam lacked the coordination and let the rivals dominate the opener but began to find their groove in the second. The Indo-Romanian combination erased a 1-4 deficit and levelled the score at 5-5 in the second, breaking Rutuja’s serve twice. But the top seeds were more solid tactically and broke back on Miriam’s serve immediately to go up 6-5. Emily then served out without further drama to pocket the title and in bargain each player earned 50 WTA points.

In singles, Brazillian Laura Pigossi won the biggest singles title of her career to date on the ITF WTT after inching past Ukaine’s Marianna Zakarlyuk 6-0, 3-6, 7-6(5).

The 26-year-old Brazilian now has six ITF singles titles to her name and boasts a 13-1 win-loss record for the year.

Pigossi has enjoyed greater success in doubles, winning 38 ITF doubles titles to date and reaching a high of No. 125 in the WTA doubles rankings last year.