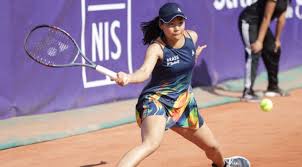 Japan’s Nao Hibino stunned No.8 seed Sloane Stephens in the first round of the Internationaux de Strasbourg on Monday by score of 6-2, 3-6, 6-1.

The Japanese World No.83 did not fare well in her first three events of the, but secured a well-earned first-round victory on the French clay against the former Roland Garros finalist in one hour and 45 minutes.

In a match that saw a combined 34 break points for both players, Hibino broke serve nine times and never trailed in each of the  set she won.

After both players split sets, the American was  unable to capitalize on 3 break points she had in the first game of the decider and never again got close to breaking serve from there.

Serving 11 double faults of her own in the contest, Stephens saved a match point to deny Hibino a bagel, but the Japanese No.3 ultimately wrapped up victory on her third match point.

Up next, Hibino will face Kazakhstan’s Zarina Diyas for a spot in the quarterfinals. Diyas, the World No.73, came through a marathon victory over American qualifier Christina McHale in three hours and eight minutes, rallying from a set and 4-0 down to win, 6-7(4), 7-5, 7-6(3).